Get Certified in Doughnut Decorating with Doughnut Academy

Over Christmas I was wracking my brain searching for a gift to buy for someone special. It was a difficult task as they don’t really need, nor want anything specific and were giving me the ol’ “You don’t have to get me anything” spiel. But we all know, that’s just a test and what they secretly mean is ‘You have to get me something and something that I will love’.

After a few ideas that I thought could work, such as a fancy meal somewhere or a few tango classes that we want to try, they just seemed a bit underwhelming and again, knowing this was a test, I needed to find something better. This is where I thought of something that we agreed to do, something that this person loves and to be honest sounds a bit fun!

The thing this person loves is frequenting a relatively new artisan doughnut shop called Doughnut Time and tasting their new creations. Perfect! I whipped out my credit card and booked us in. 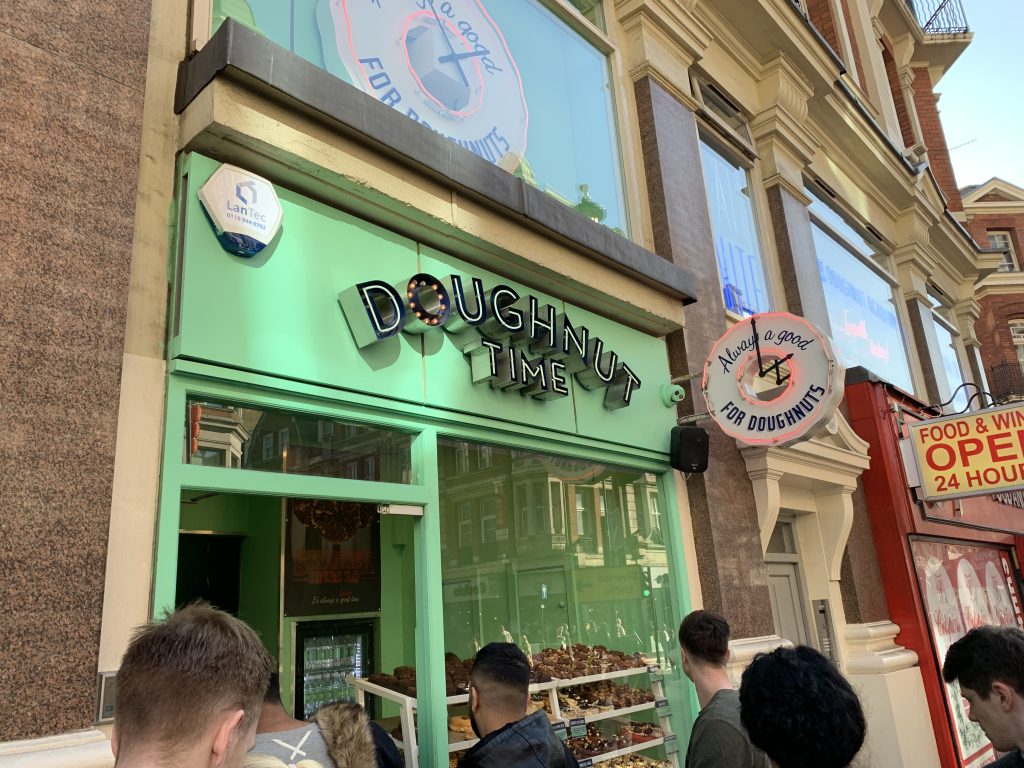 We just finished the class yesterday so here is what went down, what we made and what to expect when you head on down to their main Shaftesbury avenue store and partake in their “Doughnut Academy”. 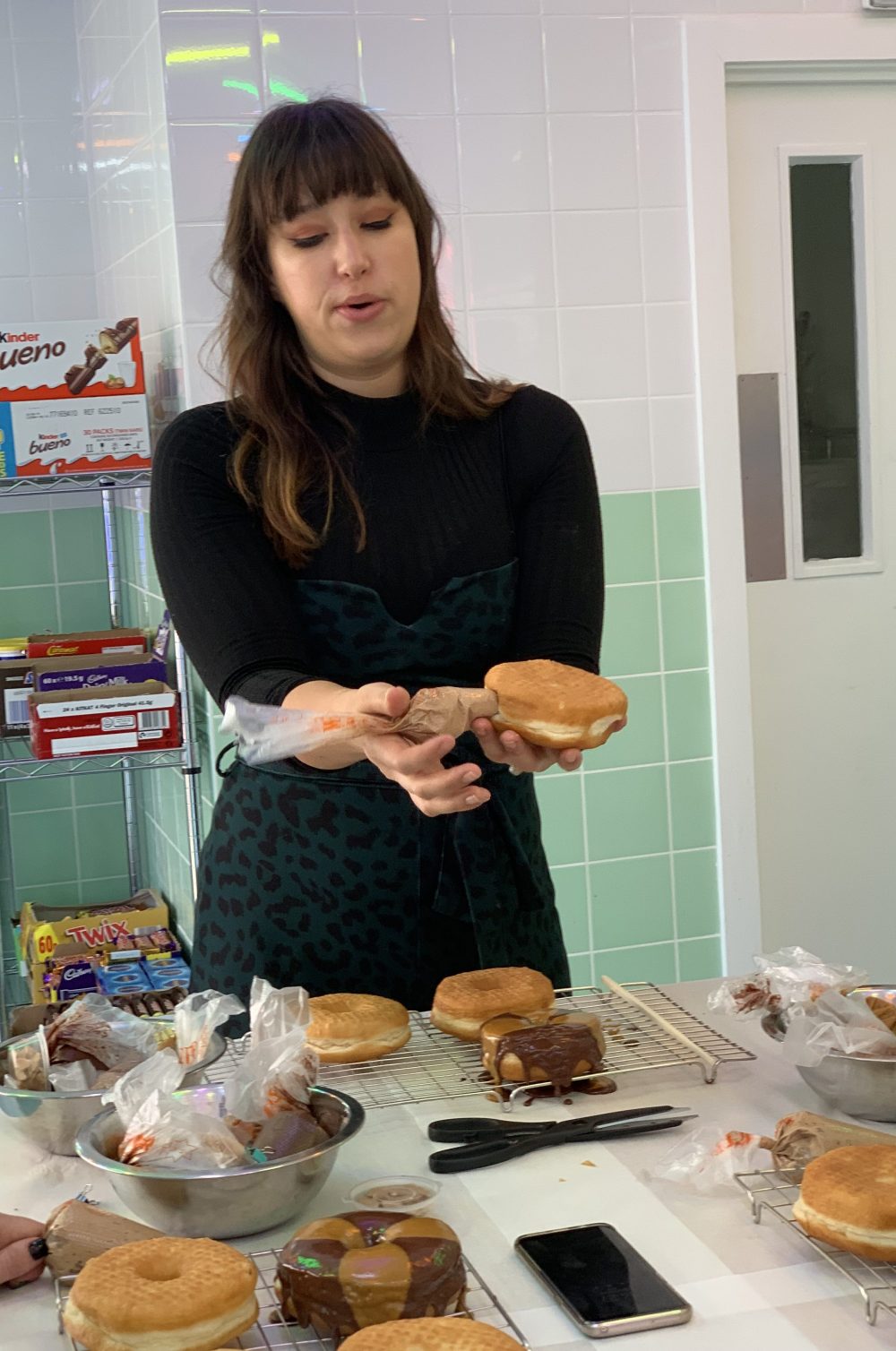 We arrived just before the class was about to begin at 2pm with a few “students” already waiting outside. After a few minutes, we were brought inside and upstairs to be welcomed by Lara Thompson, head pastry chef. She told us a bit about the company, her role etc and then we washed up and were ready to decorate some doughnuts! 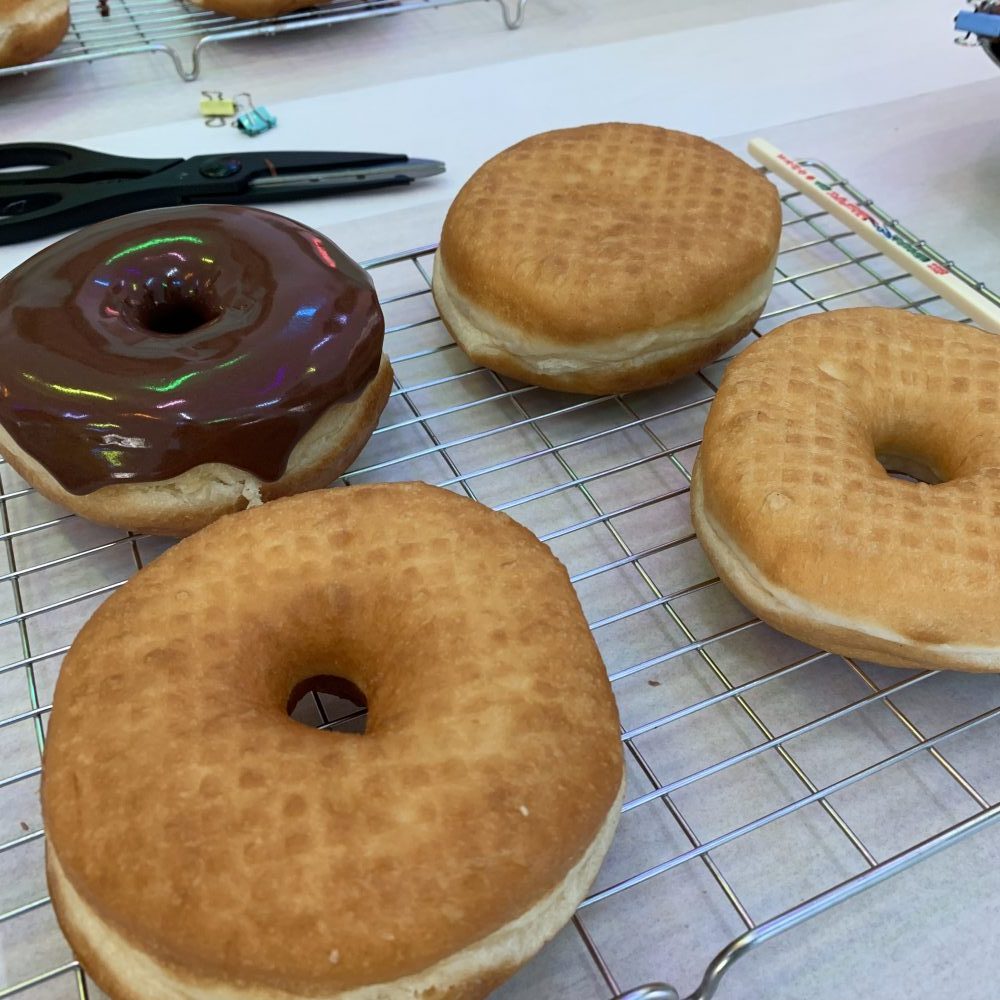 We started off grabbing four (naked) doughnuts each and Lara showed us how to use our pipping tools (below), filled with lots of tasty fillings such as Nutella and hazelnut cream 🤤. 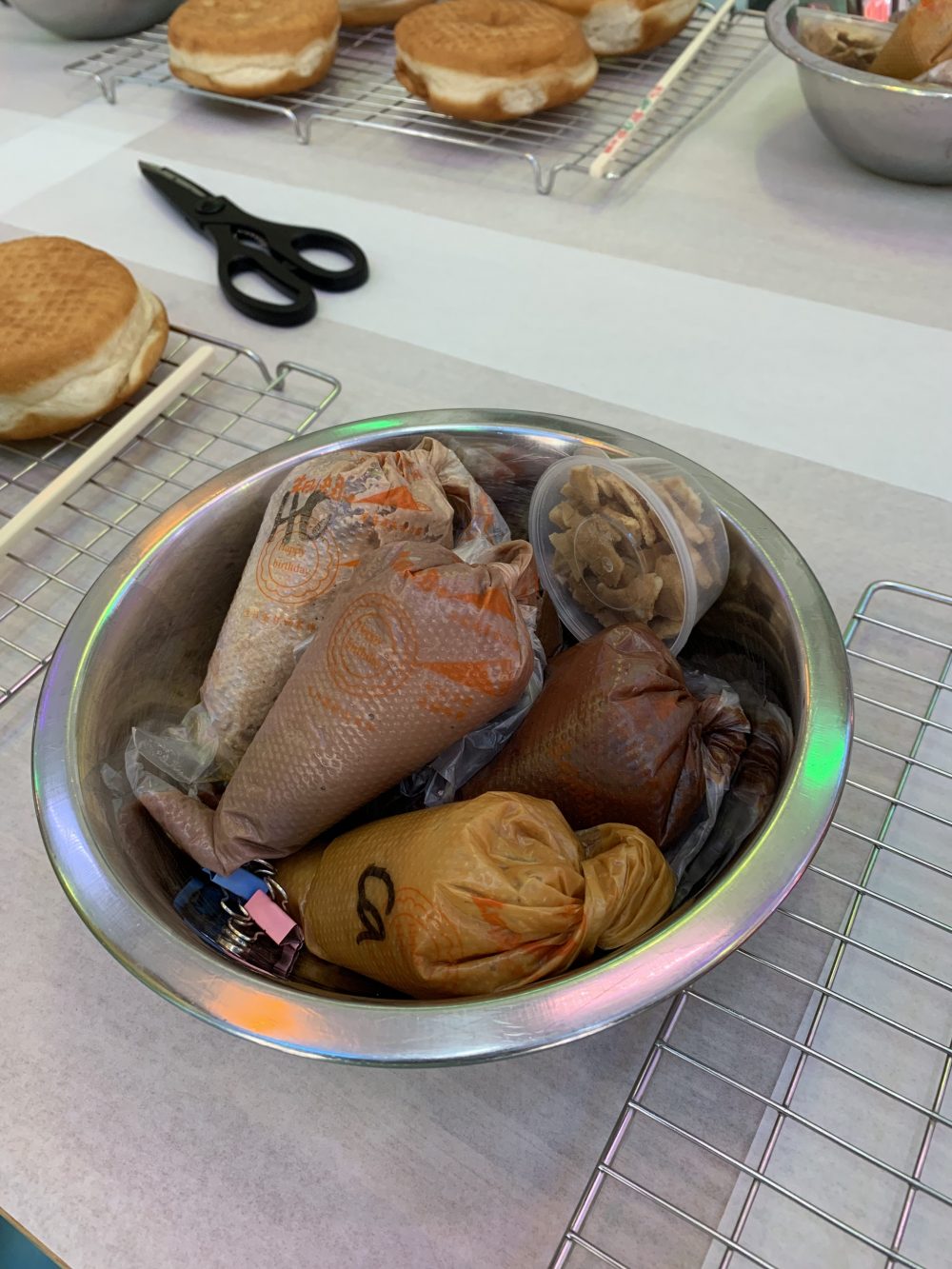 We made the following creations, that are available for sale in stores (at time of writing): 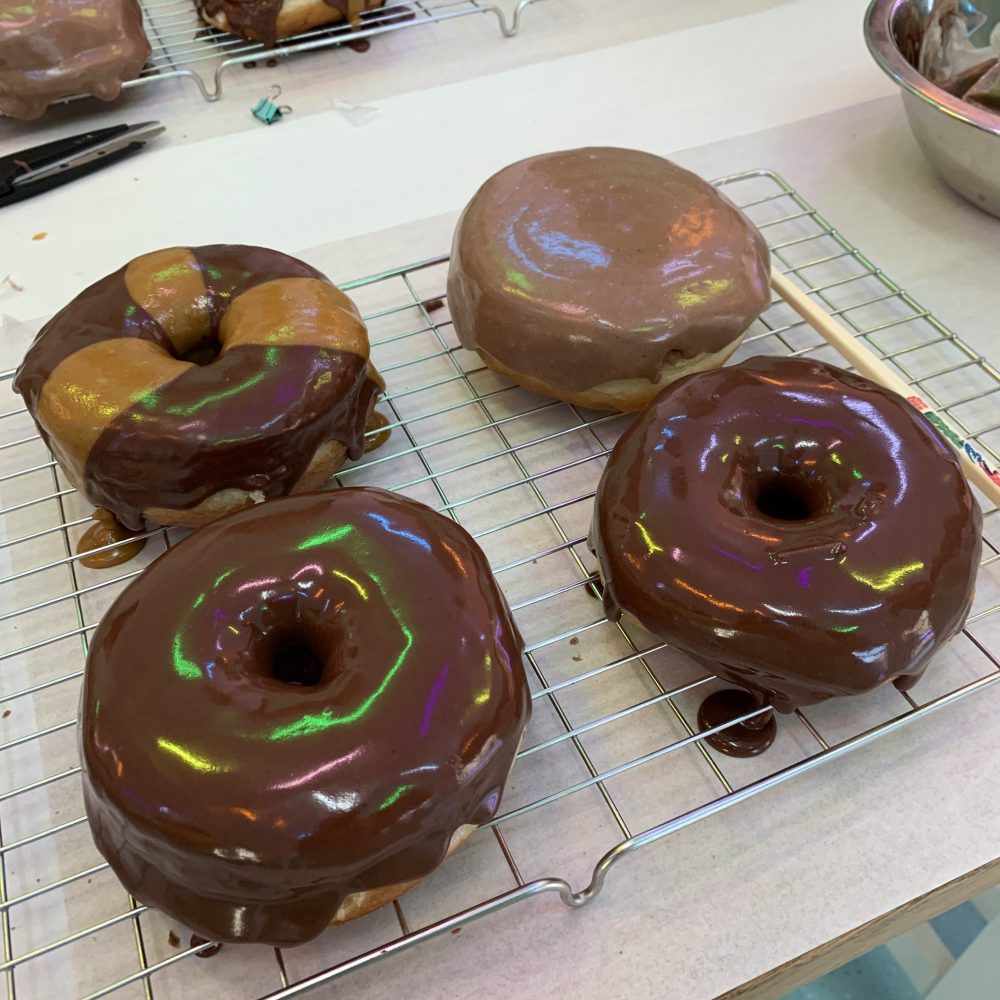 Doughnuts getting their glaze on after the fillings have been added and looking pretty good if I do say so myself. 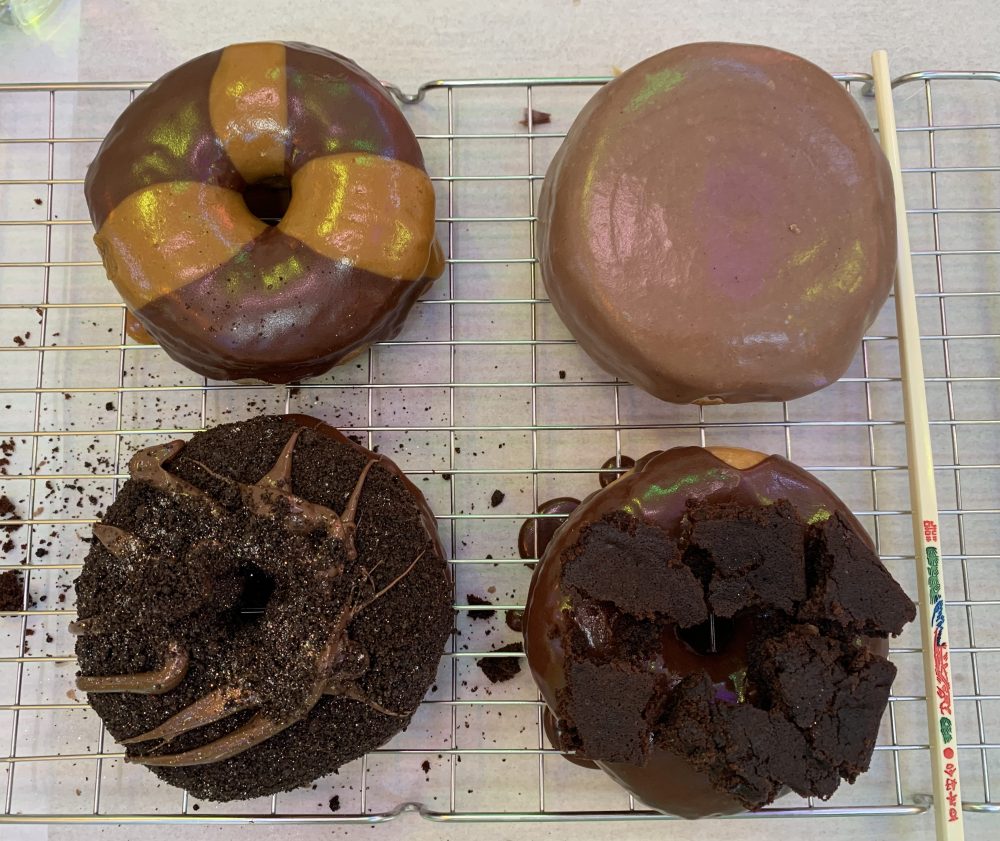 After the glazing and filling of the doughnuts, we added some caramel to the ‘Hans Rolo’, brownie to the ‘Cornelius fudge’ and some crushed up oreo crumbs, edible glitter and chocolate sauce to the ‘strange rings’ doughnuts. Things are shaping up and looking delicious as hell at this point! 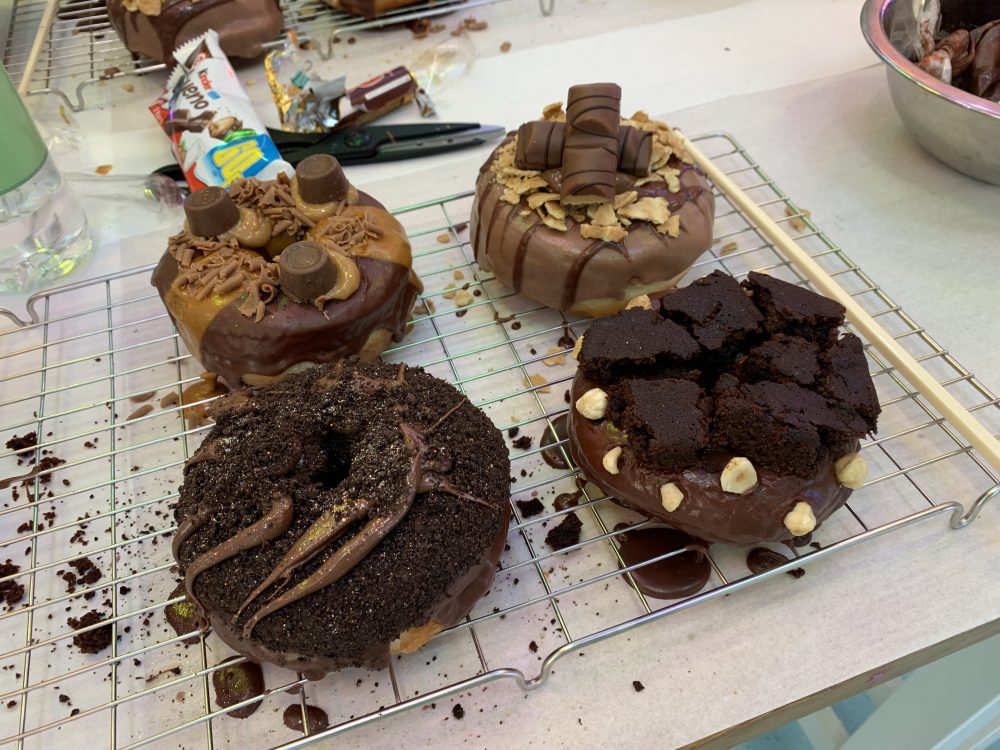 The finished doughnuts are above and I was very happy with my batch, well apart from adding too many brownies to one of them – Less is more!

We then placed our ‘work’ on the cooling rack and cleaned up (Playing with fillings can get very messy indeed).

I actually thought the class was finished and we were about to head home, but Lara then asked us grab four more doughnuts to decorate any which we wanted. Part two was about to begin and we could create anything our imaginations could conceive and had free rein to use any of the ingredients in the kitchen!

Below is the chocolate bar area, industrial sized tubs of various fillings and sweets section. 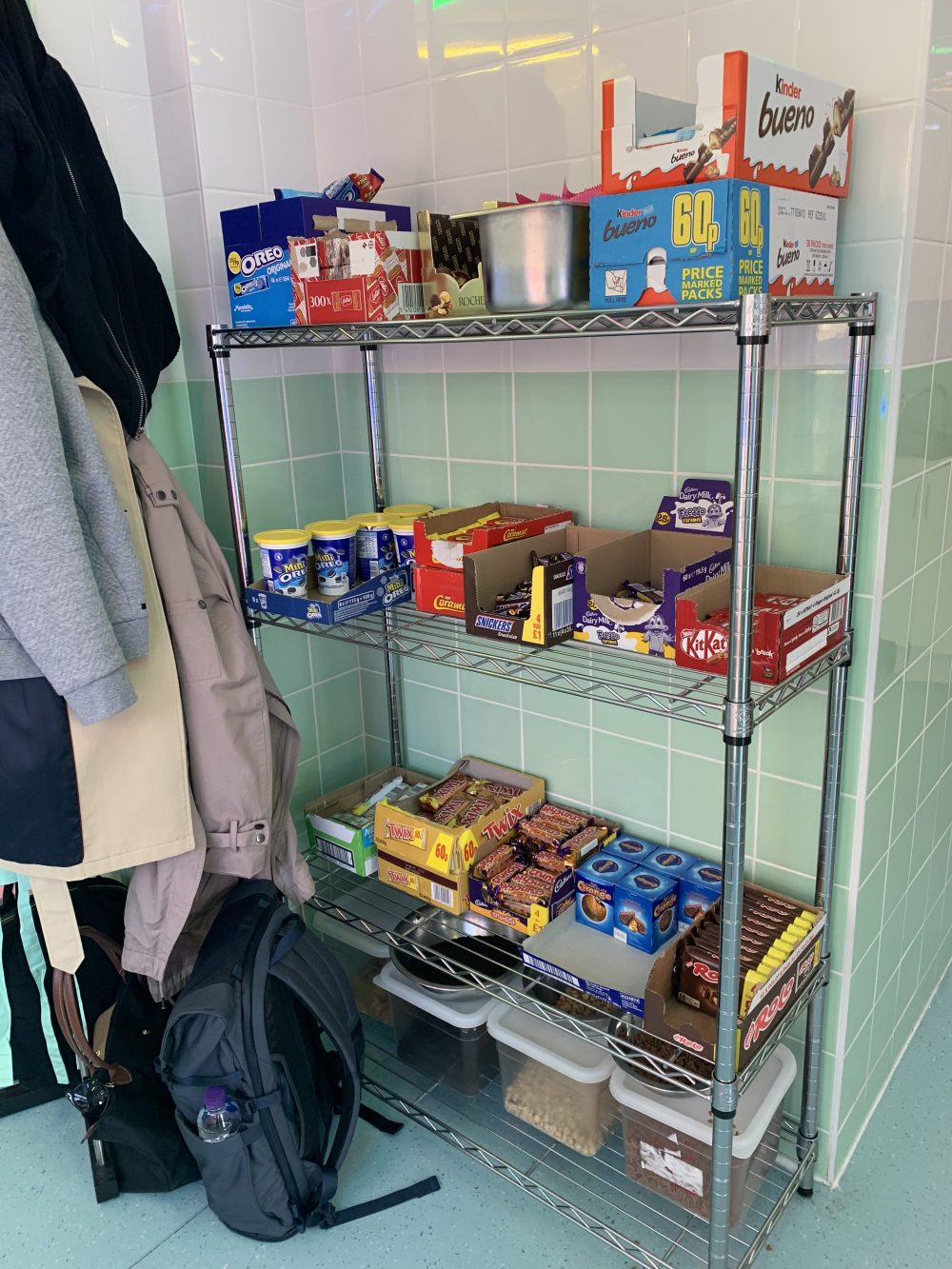 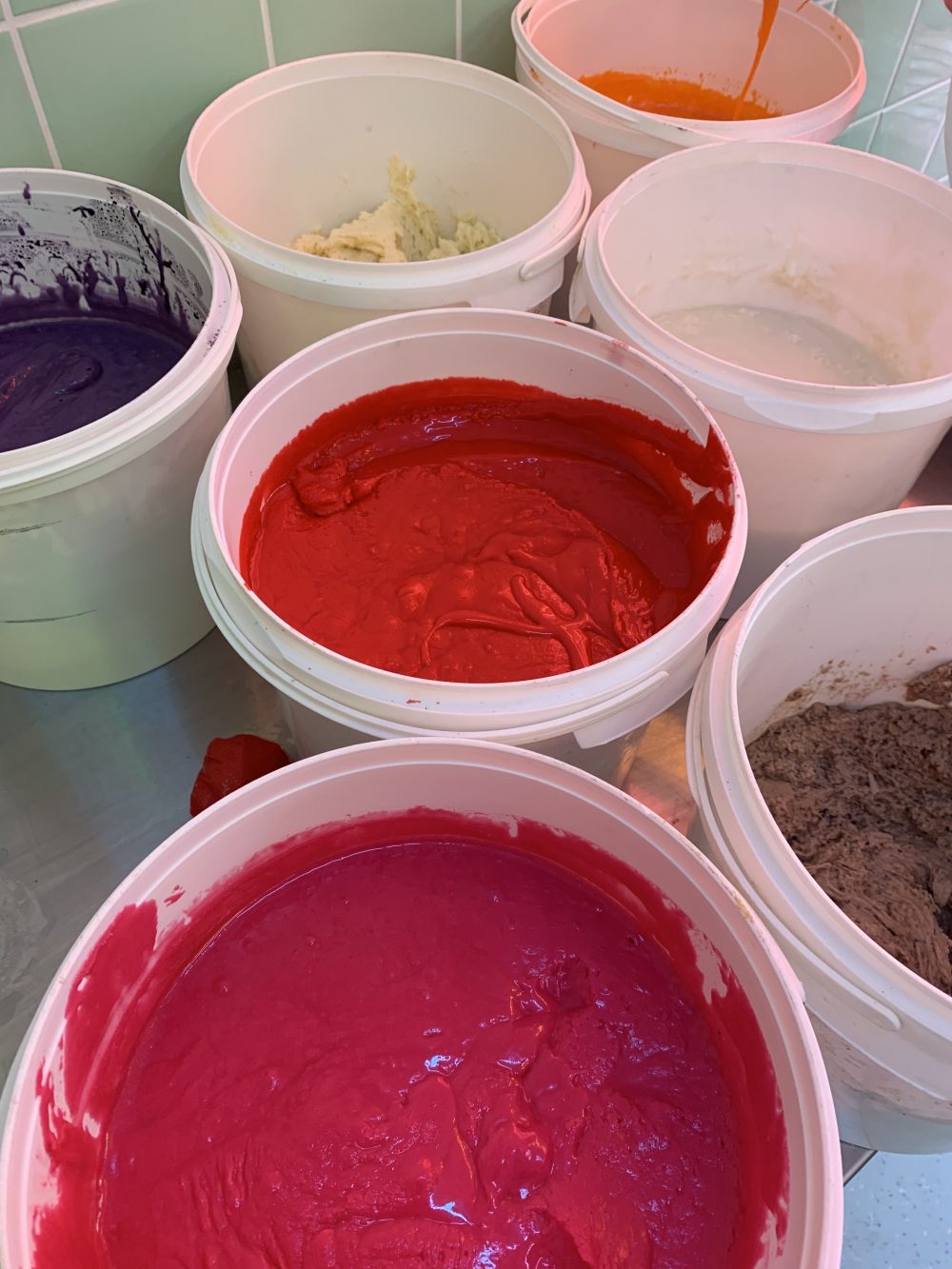 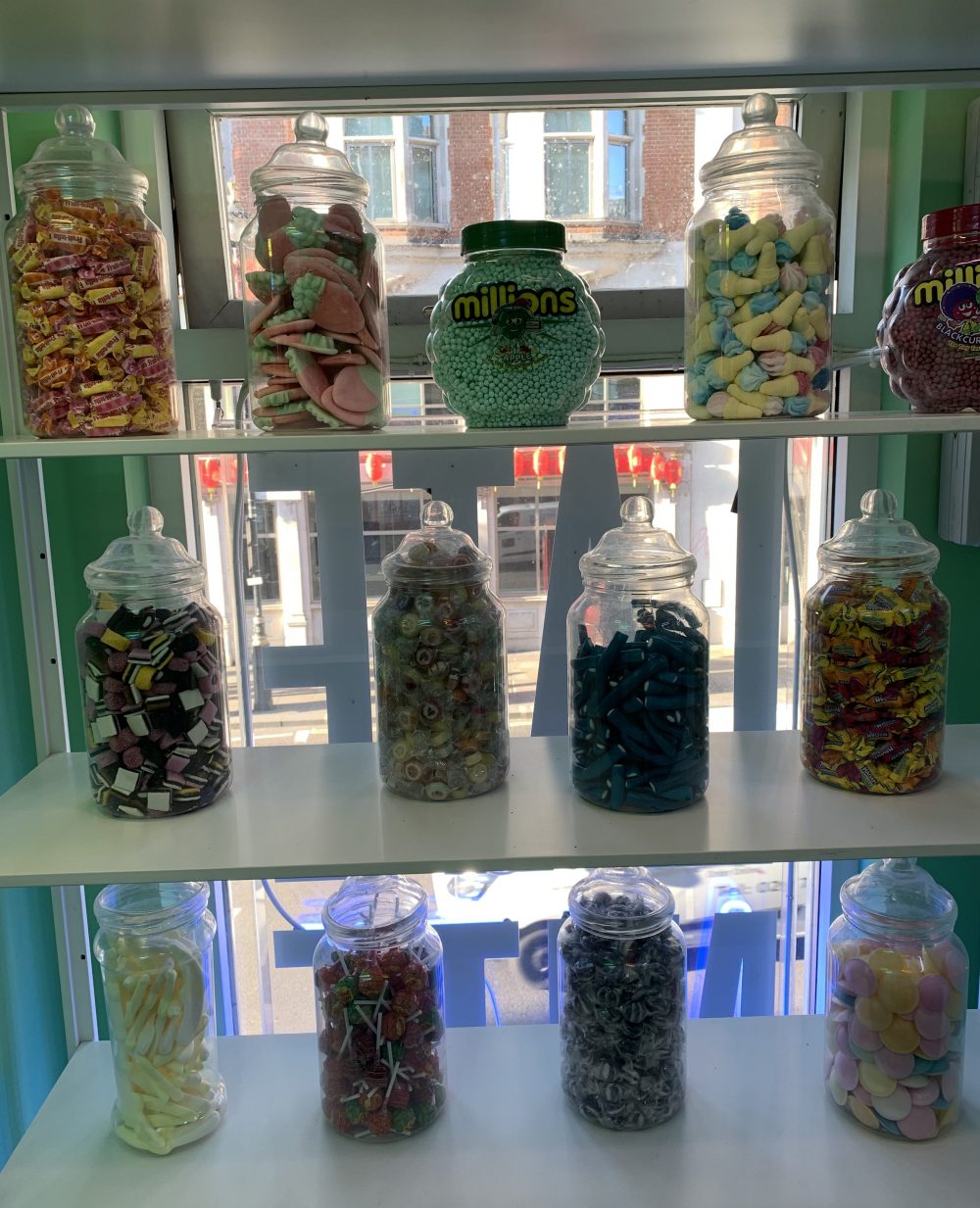 The below is what I came up with. Not exactly sure what I was going for, but they look decent enough. 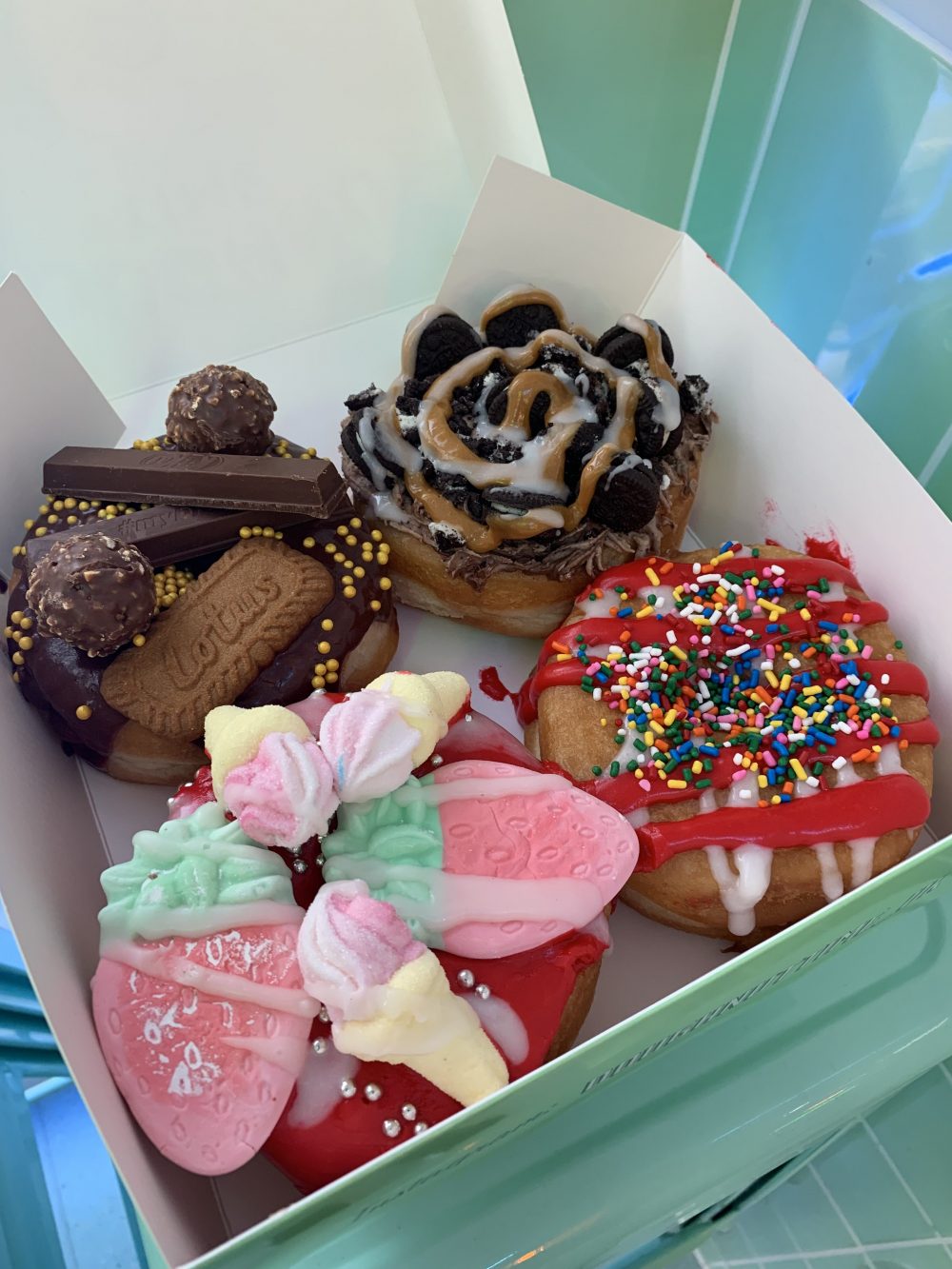 Once we were done and I had my Frankenstein doughnuts boxed up, Lara said we can now take the previous doughnuts too! Eight doughnuts per person to take home… way too much but I was not complaining. We also kept our fancy Doughnut Time apron. 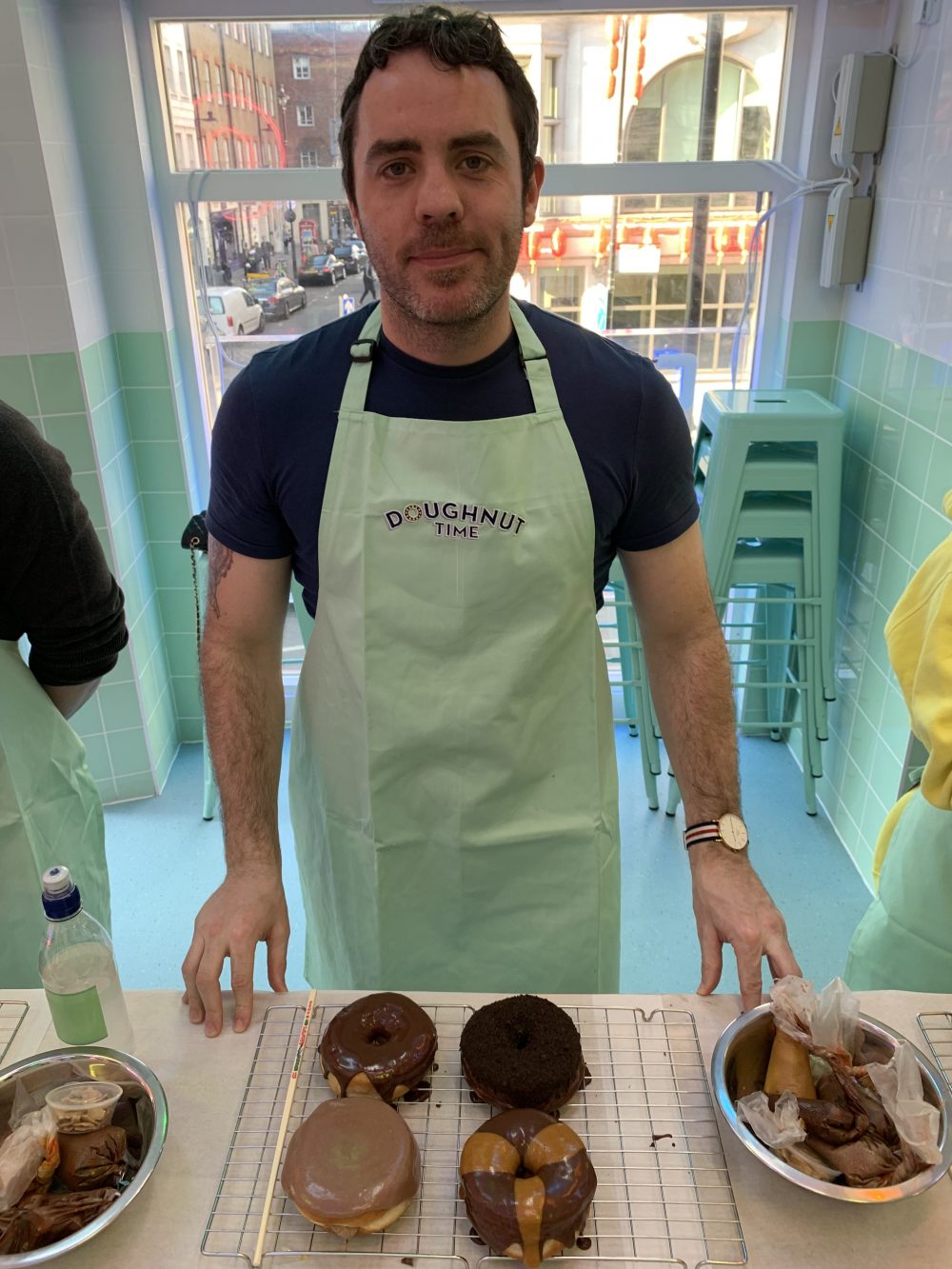 All in all, it was a fun afternoon and I think it went down a treat with my doughnut making partner. I would absolutely recommend it to pretty much anybody. Thanks for a great day guys.