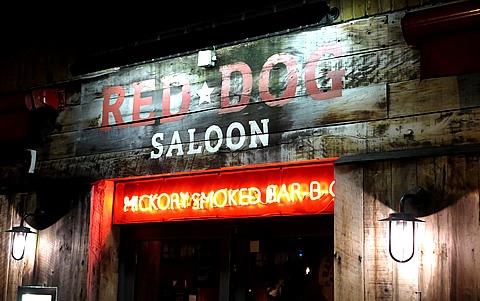 I have been hankering for some tasty American style food for some time now. You know, something that wouldn’t be out of place on Man vs Food. Well, in my research, I stumbled upon a burger called the The Devastator (18oz chuck steak, 200g pulled pork, 6 rashers applewood smoked bacon & 6 slices American cheese), from a place called Red Dog Saloon.

Now, not that I wanted that exact burger and the price is a little off putting (£22.75), but a place that offers something of that size, sounded amazing and exactly where I should venture to get my American food fix on. I chose the Hoxton branch and off I went.

Brimming with excitement and taking my careful time to choose my food, I settled on the Bar-B-Q burger with applewood smoked bacon, American cheese & onion rings. My side was french fries and some mozzarella sticks for good measure.

Upon inspection, the burger looked great and I was very happy with everything so far. Things went south very quickly. I took a bite and noticed not only the buns (which in my opinion were not heated up), but also the patty was cold. £11.45 for a burger and it was served cold, not even lukewarm! Outfuckingrageous!

I asked for it to be reheated, expecting a new one to be brought over (my mistake, never assume). When I got my hot burger back, it was disgusting. Oh it was warm alright, but it now tasted like a microwavable tasteless cheap burger.

Small cramped tables. Cold soggy burger. The french fries were something that you would find in a cheap chicken shop in East London. My server was nice and friendly but at one stage, as I was popping my plate onto the adjacent table briefly (ya know, as the tables are fucking miniscule…) to take some photos, a guy came over and asked if the burger was ok. Well, no sir it was not, but we won’t go over that again. I informed him I was taking some photos, and he walked off laughing. So um yeah, very fucking professional.